New Hands on the Farm

One of the most beloved attractions at the State Fair is the Andringa Family Foundation Little Hands on the Farm. This interactive exhibit has been teaching kids about life on the farm for years. Little Hands has been engaging kids and handing out those signature Pioneer hats since I was barely old enough to fit one on my own head.

The opportunity to dig in the dirt, ‘milk’ a cow, and pick up a hard-earned popsicle at the end of the route draws kids and families back year after year. This year however, has presented a new set of challenges. COVID-19 is not going to cancel the Fair this year, but it has still brought about some necessary changes across the Fairgrounds.

For the Little Hands Exhibit this looks like reducing the amount of touch points involved by introducing a new passport. Instead of having items that would constantly need to be sanitized by volunteers, kids will earn a stamp at each stop. After completing their tasks, they will still receive a snack at the general store but now they will also have their souvenir passport as a reminder of all they learned at Little Hands to take home.

New passports aren’t the only change you will see at Little Hands this year. It also gained several new sponsors including Kemps Dairy, Iowa Select Farms, Henning Construction, Renewable Energy Group, Sylvan Learning Centers and Iowa Egg Council. These new sponsors have allowed for several new upgrades to the Farm to be possible.

A brand new chicken coop, signs, and even a new milking cow are a few of the additions you will want to keep an eye out for as you make your way through the farm this year. We know change can be difficult at times and this new process may be an adjustment. However, it is always exciting to see good things become even better and for our favorite things, like Little Hands on the Farm, to be able to happen again, in a way that is safer for everyone. 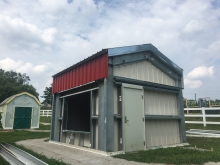