A few weeks ago we had some of the Foundations’ famous faces at our Corndog Kickoff. We are thankful to team up with so many talented people to share the love of the Iowa State Fair.

In 2006, Sarah Pratt became the Fair’s fifth butter cow sculptor. Sarah had an apprenticeship with Norma “Duffy” Lyon for 15 years before she became the main sculptor. Her twin daughters now work alongside her. They became her official apprentices shortly before turning 14, the same age Sarah was when she went to work with Norma. When Sarah isn’t in the 50 degree cooler, she works as a special education teacher. 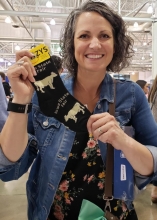 The Iowa State Fair Food Department is the largest out of any state fair in the country. There are 203 divisions, 809 classes, and over 9,000 entries. Russel Place received 2nd and now make all of the Iowa State Fair Blue Ribbon Foundation BBQ. This will be sold at the 2021 Fair. 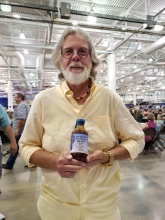 Dan Livengood, Creator of go fish game and it’s a fair game. In 2004, Dan helped create the “Fairopoly” game. The Foundation called on him again in 2009 to help create the “It’s a Fair Game.”

Karen Brockelscby is a quilter extrordaire. She is a part of the Ankeny Quilting and Sewing Circle. Karen has donated many items to our auction throughout the year. She makes the famous t-shirt that are made into pillows. She also donates quilts to the Corndog Kickoff Auction. Karen’s quilt is featured in the top row in the middle of the 2021 Ornament. 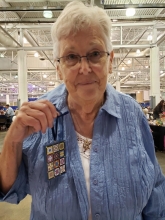